The Friends of the Library are sponsoring a film series, brought to us by Ralph and Carol DeLauro of FILM FORUM.  FILM FORUM shows free films twice per month on the second and fourth Wednesday of each month at 6pm in the Civic Center Library auditorium for the entire fiscal year.  The films on the second Wednesday will be contemporary American and foreign films, preceded by a ½ hour free concert by local or County musicians, singers, or dancers.  The films on the fourth Wednesday, added starting in June 2017, will be classic cinema and cult movies, with a discussion or Question & Answer (Q&A) session with the audience after each film. Mr. DeLauro will conduct the discussion, which may often take the form of a film class.  The film series is funded by a City of Chula Vista Visual and Performing Arts Grant.

FILM FORUM was founded by Ralph DeLauro in 1984, and was previously held at the San Diego Central Library for more than three decades.  In 1986, Ralph began teaching film discussion classes for older adults and seniors through several "Lifelong Learning Centers," such as EGO (Educational Growth Opportunity), SDSU Extended Studies, San Diego OASIS, College Avenue Center, Paradise Village and the Center for Continuing Education at Rancho Bernardo. He truly enjoys sharing his love and passion for the magical world of cinema.

In 1991, Ralph helped Doug Yeagley start a unique outdoor movie theater in a historic Mission Hills neighborhood. Twenty-six years later, Ralph and Doug are still showing movies at "Cinema Under the Stars" behind Tops Salon on Goldfinch Street, to the delight of many San Diego movie-goers.
​
The San Diego Society of Film Critics has awarded Ralph the 2015 Kyle Counts Award for his many years of excellent film programming and film presentation at the San Diego Central Library (31 years) and at Cinema Under the Stars (26 years).
FILM FORUM offers audiences a unique opportunity to view quality films in a theater setting at no cost. Mr. DeLauro carefully selects the films, which include recent releases and classics, and gives a short introduction before each film. He is also the co-founder and host of Cinema Under the Stars in Mission Hills and conducts Film Discussion Classes at several senior centers in San Diego County.

We will be having a mini-concert on October 11th at 5:30 pm. Students from the Avant Garde Music Company will play prior to the screening of Hunt for Wilderpeople. 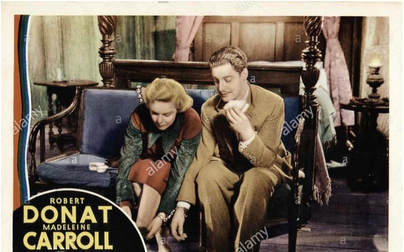 Alfred Hitchcock's heart-racing rush of excitement set the standard for the master's “wrong-man” thrillers. Richard Hannay (Robert Donat) is hurled into a web of intrigue and espionage when he stumbles upon a conspiracy and into a romance with the cool Pamela (Madeleine Carroll). 1935. 85 minutes.

Civic Center Auditorium Gets a Facelift