What Kind of Library Does Chula Vista Need? 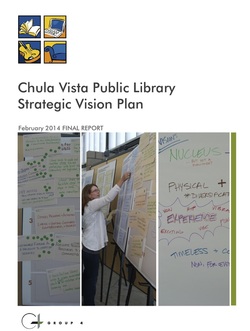 The library of the future must serve its residents “inside, outside and online” ­– providing programs and services within its walls, activities out in the community, and quality information through 24/7 computer access. That is the crux of the library’s updated strategic plan, which library director Betty Waznis and David Schnee, of Group 4 Architecture and Planning, presented to City Council in April.

They noted that community input gathered over the past few months indicated that the Chula Vista Public Library should be:

Schnee, whose firm designed the Otay Ranch branch library that opened in 2012, also addressed the library’s physical needs, noting that the Civic Center library will soon  need to be renovated or replaced and that the South Chula Vista library, which is now 20 years old, will also eventually need renovation. The plan also calls for a new branch library on the eastside, possibly in the Millenia community now under construction.

Click here to download a copy of the 2014 Strategic Vision Plan.
Although more and more information is now available electronically, Schnee noted that libraries continue to need space. “What takes space?” he asked. “People!” People increasingly use the library as a place for meetings and group activities, as a place to access the internet and as a quiet place to work and read. Waznis noted that the Civic Center library has already responded to that need, converting some of its downstairs offices into group study areas or rooms where local businesses can meet. The new Annex at Otay Ranch has also been designated for public classes and seminars, as well as children’s story times. 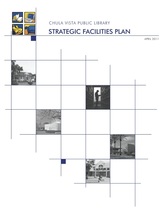 Schnee praised the Chula Vista Public Library for its “scrappy” response to limited funding, such as leasing the Otay Ranch storefront for $1 a year. Between 2005 and 2013, the library saw a 74 percent reduction in staffing and a 52 percent reduction in budget while the city’s population grew by 16 percent. At the same time, library hours actually increased by 7 percent, and with the opening of the Otay Ranch branch, visitors to the three libraries grew by 35 percent between 2011 and 2013.

Council member Pat Aguilar expressed concern that the 2014 plan does not include a branch library in Rancho del Rey, which the developer promoted when marketing that neighborhood a decade ago. However, Schnee and Waznis explained that it is more cost effective to operate one large, “destination” library than several small branches. And Schnee pointed to a graphic showing that residents are willing to travel out of their neighborhoods to visit all of the three existing branches.

Waznis also announced that she has been meeting with Southwestern College superintendent Melinda Nish about the possibility of offering library services in the college’s new cultural arts center, just east of Rancho del Rey.

Council member Mary Salas endorsed the concept of building a single large library – or expanding the Civic Center library – noting that a  larger building could include an auditorium capable of hosting major cultural events. Council member Pamela Bensoussan echoed the need to upgrade the Civic Center library, while preserving its “iconic” architecture. She also suggested that any library plan include space for the arts.

“It all depends on the funding,” Waznis said, noting that even space such as Otay Ranch, which carries a minimal capital outlay, requires ongoing money for staffing and materials. Council will hold workshops in the proposed 2014-15 budget at 5:45 and 6:30 p.m. on April 29 and 30.